This time of year always gets me thinking about Mary. Not just about the pictures of her we see in the nativity scenes that pop up everywhere in December, but about what it must have been like to be her. 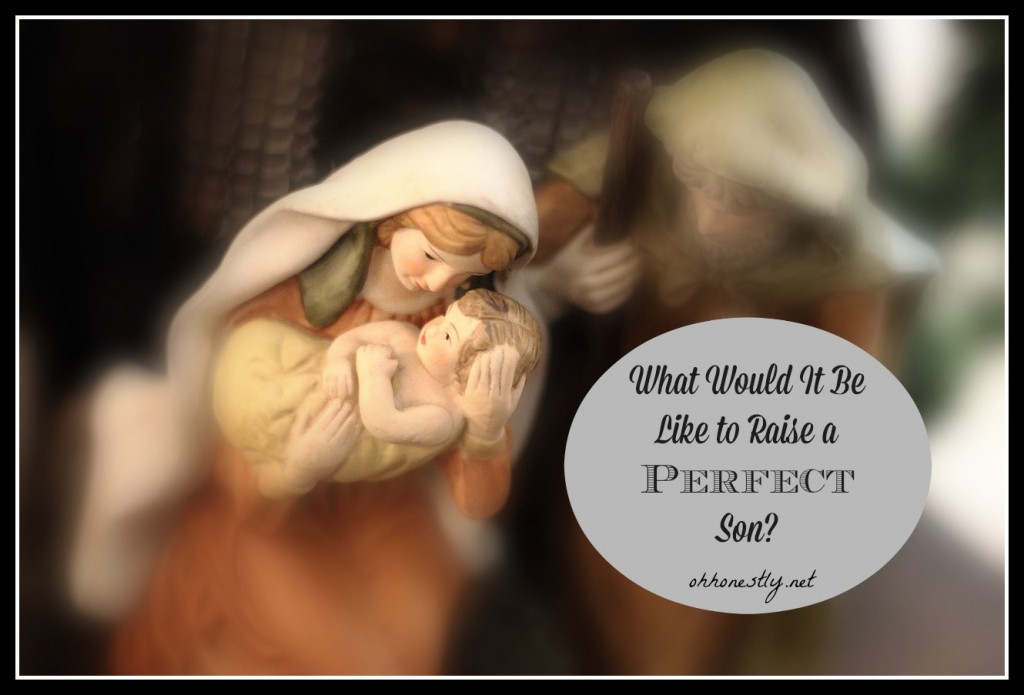 What Would It Be Like to Raise a Perfect Son?

Before I go any further, let me step aside for a moment to say this: I know different faith traditions hold different beliefs about Mary. The following is in no way an attempt to be disrespectful to anyone’s beliefs or to the person of Mary and the amazing task she was given to carry out. I am simply writing about it from the point of view I hold to be true from reading the Biblical accounts.

When I was younger, my thoughts usually centered on the time leading up to Jesus’ birth: How Mary must have felt when the angel came; who (if anyone) she told immediately after he left; how amazed and humbled she must have felt to be chosen for the most monumental task in history.

Clearly God saw things in Mary that made her the right one for the job, and I imagine she was given extra measures of grace and strength, but I wonder how long it took for the reality of her undertaking to settle in.

How long did it take before the gossip started swirling around town? There were those who knew the truth, but how many others assumed Mary’s claim was just a wild tale meant to cover up an indiscretion? Did her friends shy away from her? Did they whisper behind raised hands only to stop when she came within earshot? Was she lonely and scared?

As I’ve gotten older, my focus on Mary has shifted away from her pregnancy and towards her time as the mother of Jesus. This part of the story never had much of an impact on me until I became a mother myself, but now I find it absolutely fascinating to think about.

The Bible has little to say on the subject of Jesus’ childhood, so I don’t know exactly what it was like, but based on my own experiences and those of every other mom I know, I’m guessing I’m not too far off.

Imagine having a child who always obeyed. Always. The first time. Every time.

“Pick up your toys, please.”

“We have to leave. Go to the bathroom, then put on your shoes.”

It’s like a dream, right? An unimaginably perfect dream.

I know my human nature wouldn’t take long to kick in and start giving me prideful little pats on the back. “Wow, look at that Son of yours. He always does what He’s asked. He never fusses or whines. You are doing a really good job with him. You’re raising Him right!” I wonder if God had to give Mary little nudges every now and then to remind her that she wasn’t raising just any boy; she was raising His Son, His perfect Son.

Of course, nothing makes us realize how little our parenting ‘skills’ have to do with our children’s personalities than having a second child. I clearly remember thinking that our oldest wasn’t whiny because of how we raised him. Then we used the same methods with our second child, and they did not work at all. He whined nonstop.

I can only imagine what a shock it must have been for Mary when her second child came along.

Of course she knew that Jesus was God’s Son and her second was not, but even so, the contrast between the two must have been so stark. Suddenly she truly came face to face with the fact that although Jesus was fully human, He was also fully divine. She knew it before, but now it was so clear to see.

It must have been quite a learning curve to parent a sinful human being after getting used to parenting a sinless one. Did she struggle to not play favorites? Did she lay awake at night worrying about the souls of her younger children? Did she feel like a failure for not being able to make them more like Jesus?

As a mother and a sinful human being, I struggle daily with feelings of guilt and failure. How did she feel with Perfection living in her home in bodily form? Did she feel every failure more acutely? Did every mess-up stand out in living color? Were there constant comparisons? Constant feelings of not measuring up?

At first,  I thought that must have been the case, but then I remembered Who was living with her and why He came.

Yes, Perfection lived in her home, but so did Love. Divine, unconditional, forgiving LOVE. I have a feeling that each time Mary was confronted with her failures, she was just as quickly confronted with that Love. And although we don’t have Him with us in bodily form anymore, He’s still around for anyone who’s interested.

Will you invite Him to live in your home?

“For God did not send His Son into the world to condemn the world, but that the world through Him might be saved.” John 3:17